As probably everyone heard by now, following the closure of FeedBurner in last year September, GoogleReader is closing down its doors on July 1st. Google is citing declining usage, which surprises me greatly since I remember news sites claiming in ~2008 that RSS's success is going to cause its own downfall, since so many people are using it that some servers can't handle the stress. If you aren't using RSS, you are missing out on one of the greatest functionalities of the web. Reading through an RSS reader is like watching your movies without commercials. I sampled the threads on Reddit, and Hacker News, to see what other good services are there.

A bit background on how I use RSS. I check my RSS reader 2-3 times a day, and have around ~90 feeds at the moment, which results in about 40 news items every time I open it, and I can read through these usually in 15 minutes. I don't need any kind of grouping or tagging functionality, because if I want to categorize something, I save it as a favorite under proper tags in my browser. I don't need any kind of sharing or commenting functionality either, I see these as a grab for some social media advertising for the service itself, if I want to share something with a friend I just IM it to them if they are online. Basically, I need only two things:

There were a few solutions mentioned, but NewsBlur, and TinyTinyRSS seemed to get the most attention.

NewsBlur offers both a paid, and a freemium service. The limitations of the free service are 12 feeds max, site updates happen only once, and you can only share publicly, instead of doing protected and private sharing, whatever they could be. Having 12 feeds at max is a deal breaker to me, though I wouldn't mind paying for it, the price is $1 per month.

It has some a training functionality, where you can tell what you like about this article (author, title, publisher, etc.), and I guess it uses this information to sort articles to the top. It has 4 views, original, which shows the webpage itself, feed, which is the river like view that I was talking about, text, which shows only one item at a time, and story, which seems the same as original. It has a lot of keyboard shortcuts, but they aren't customizable. You can have both categories and tags. The main selling point seems to be the training and sharing functionality, as it is advertised as a social news reader. It has an iPhone, and Android app, and a public API.

It is also fully open source, and up on GitHub, so you can grab the source, and modify it, or self-host it. You can try out a demo if you click on the try button on the homepage. 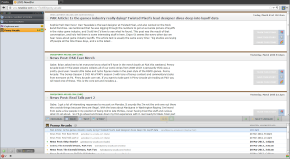 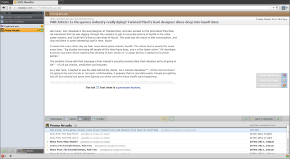 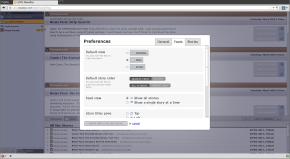 TT-RSS is also open-source, written in PHP, and have been in development since 2006, so if you look at the code you will some really ancient practices there (even PDO didn't even exist back then). It has the river like view I'm looking for, an only-title view, hideable feed column, you can choose to display the body in a vertical, or horizontal split, and has a "combined" mode, which is exactly the same as Google Reader's, even more, it has a plugin that enables Reader like keyboard shortcuts. These last two points pretty much sells if for the majority I believe.

It has the usual categorizing, and tagging functionality, you can also set up filters to hide or autocategorize articles. It has fully customizable keyboard shortcuts, which is another +1 for me, though it is not configurable from the settings, it's only available through writing a plugin, but it's extremely easy, even if you don't know PHP (here is the script I wrote). It has an Android client, but surprisingly, no iPhone app, even though it has an external API. It has a webapp plugin, that you can install, and it presents a nice interface for mobiles and tablets. It can work with newsbeuter out of the box, which is another +1. You can also set it up in single user mode, or multi user mode, if you want to host for your friends. Based on the presence of a multi-user mode, there are probably public hosting providers for TT-RSS, but I haven't seen any. Of course you can just also set it up for yourself.

There should be a demo site, but it was taken down due to high traffic.

I see TheOldReader mentioned a lot, it has a demo page where you can see how it looks, and it does look nice. It offers the same river view that Google Reader does. OwnCloud is another frequently popping up name, but it isn't a news reader, it's a cloud server solution that can store your photos, manage your calendar, sync files like Dropbox, version your files, and so on. It happens to have a news reader plugin but I couldn't find a demo for that. I couldn't find a demo for Feedly either, but it looks nice and clean from the screenshots.

It was probably obvious, I'm going with TT-RSS, as NewsBlur is missing the shortcut customization, and I'm uninterested in the social and sharing aspects, but it still looks like a very well built product. I would probably recommend that, instead of TT-RSS for people who just want an RSS reader to work out of the box. TinyTinyRSS' integration with newsbeuter and it's exact Google Reader like river view sold it to me as soon as I've taken a look at it.

I went with selfhosting it, since I have a VPS that I can use, but I was a bit sceptical about the code, since it came out in 2006. It does throw some warning about deprecated functions, but it also has a surprisingly well written, forking (!) feed updater, so it's fast, even with my 90 feeds. I recustomized the shortcuts to what I feel comfortable with, and I've never been happier with a feed reader. I no longer have to worry about a 3rd party closing down the service/server either.

Oh yeah, I also have an RSS feed you can follow.

Get the ID of a related entity, without loading it in Doctrine2