I have been fascinated with keyboards for a long time now, I think I currently have 6 in my flat, and I usually bring one with me to my workplace. This week I finally managed to finish my Let's Split keyboard that I ordered 2 years ago.

I started assembling this at one of my friends' place, but then ran into a problem where the two parts refused to communicate with each other. Plugging in the boards separately was fine, but as soon as I connected them together with the jack cable, they both went offline. I already spent half a day on it, so I decided to finish this later, but then life stepped in, and I abandoned the project. It wasn't until a few weeks ago that I decided I want to give this another try, but rather than going over to a friend who has soldering equipment, I'm going to buy my own, so that I can do it at home in a calm and comfortable speed.

Slightly unrelated note, but the mini TS100 soldering iron is seriously good. I don't have much experience with soldering, but I'm extremely satisfied with it, it's small, light, heats up in a few seconds, has an LCD, and replacable tips, and it costs like $60 on AliExpress. There is also an open source firmware and community around it.

So after everything arrived, I poked a bit around, and found that when I connect both halves, the arduino on the right side heats up to a point where it burns my fingers. There is probably a short somewhere, but I decided I'm not going to desolder it. I did try to desolder an arduino micro from a PCB once, and it was nightmare.

I have been eyeing with another keyboard called the Lily58 for a while now, so I figured now is the time to order that, and also order another PCB for the Let's Split.

Special mention to the people behind mechboards.co.uk, I told them that I'd like to buy a half Let's Split PCB with my Lily58 order, and they put it in entirely for free! They are in the UK, so if you are ordering from Europe, that's another reason to go with them.

The parts arrived in a few days, and after I assembled everything, it was working just fine. I have no idea what was the problem with the previous one, I followed the exact same guide. 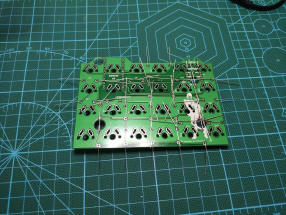 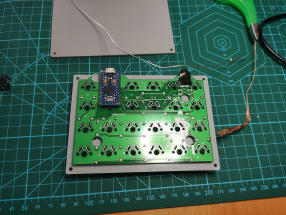 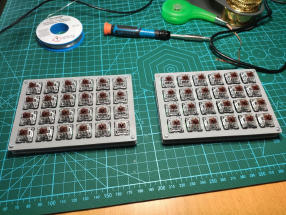 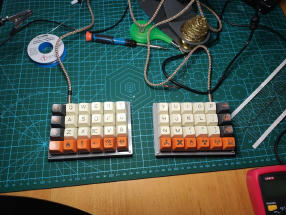 Are there enough buttons?

Well, it has much fewer buttons than a regular, or a 60% keyboard, this one is technically a 40% one, it has 6x4x2 = 48 buttons. This by itself is nowhere near enough for a normal keyboard layout, but the magic lies in the firmware it's running, which is called QMK, and it's absolutely awesome, it has so many features:

And many others. There is a very serious amount of customization that you can do with QMK, and if you love things like tinkering with your dotfiles, you are going to love this as well.

So am I more productive on this keyboard?

Long story short, no, not even close yet.

Since this is an orthogonal keyboard, and not staggered (keys are in straight columns), and it has much fewer keys, I already had to relearn typing, but I figured now might be a good time to throw in another layout as well.

The original QWERTY layout was made for typewriters. It had one goal, which is to make sure the keys that are most frequently used are as far apart from each other as possible, because it comes from the typewrite era, and this is how they avoided jams. This is the exact opposite of what you want on a computer keyboard, so some people came up with the dvorak layout, which was supposed to put the most used keys on the home row, and then came colemak which improved on this, and then came colemak-dh which improved on this.

So now I'm trying to relearn typing, and it's really really hard. It is seriously hard to retrain muscle memory. On the keyboard I use as my daily driver (regular QWERTY), I can type at ~120WPM, type racer actually flags me as a bot. On the let's split, I barely type at ~30 WPM. I'm using keybr as practice, and it will take I think 2 months to get back to my original speed. I think it's going to worth it in the end. It is already much more comfortable to type on it:

I mean, have you ever put your mug inbetween your hands while typing, and then ended up knocking it over? Look at this: 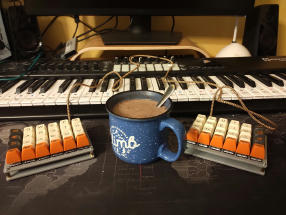 You can put your coffee, tea, pizza, whatever in there, it's already worth it just for this.

Let's see how it works out in a few weeks.